Home
›A few words about the phytoestrogens!

A few words about the phytoestrogens!

In recent years there have been a lot of speculation on the topic of phytoestrogens from both their opponents and supporters. I would like to summarize the latest data from biological research which are available today. It is necessary for a more informed and competent judgment on this subject, primarily in professional circles.

Phytoestrogens is a General term for a class of nonsteroidal substances, which are produced either from plants or from the products of their metabolism. All phytoestrogens can be divided into six main categories: kumatani; lactones resorcinol acid; isoflavones; flavones; chalcones; lignans. Hormones are lipid-soluble and are contained mainly in vegetable oils. Heating and refining dramatically reduces their concentration. Phytoestrogens are well absorbed by the body, but are easily destroyed and do not accumulate in it. Activity of phytoestrogens in 100-1000 times lower than the natural hormones, but their concentration in the plasma of human blood may be 5000 times greater than the concentration of endogenous estrogens. Of these, there are three main categories: isoflavones, lignans and coumestan, as they are most common in nature. The most intense sources of phytoestrogens are soy beans, flax seeds, red clover. But it should be noted that the latter has several advantages. Red clover contains isoflavones: genistein, daidzein, biochanin a and formononetin, while soy contains only two of these substances: genistein, daidzein and small amounts of glycitein, which has a strong estrogenic effect. Moreover, red clover contains a small amount kumatani with moderate estrogenic activity. The most active isoflavone contained in red clover is genistein The fact that in countries where food consumed is rich in isoflavones, is celebrated not only by the low incidence of breast cancer and endometrial, and prostate cancer, suggest that isoflavones, in addition to estrogenic activity, have a beneficial effect on the androgen receptor (RA). Study on the method of competitive analysis radioligand confirmed the binding interaction between phytoestrogens and RA. Moreover, the binding capacity of isoflavones of red clover extract was much higher than that of soy isoflavones. Isoflavones, entering the body, actively involved in metabolic processes, resulting in be involved in a metabolism of many substances. Phytoestrogens have a preventive effect not only against cancer, but they have positive effects on the cardiovascular system. Currently it is believed that the basis for the development of atherosclerosis, cardiovascular disease is the inflammatory process. Important role in its development plays a nuclear factor NF-κb, which affects the production of cytokines and other proteins of acute phase of inflammation. It is known that flavonoids have anti-inflammatory, anti-sclerotic and anti-allergic action which is implemented through inhibition of nuclear factor NF-κb. In particular, in studies Muraoka et al it has been proven that ingibiruet the action of isoflavone genistein. Estrogen deficiency after menopause is accompanied by changes in the metabolism of lipoproteins and increased levels of cholesterol in the plasma, which is a risk factor for cardiovascular disease. Isoflavones have a positive effect on the vascular wall of arteries. Regarding the effects of phytoestrogens on the level of plasma cholesterol contradictory information. In some clinical researches it was not observed a significant reduction in the level of lipids in blood plasma, and this is confirmed by the results obtained by Liechtenstein et al.. Isoflavones are actively involved in the metabolism of bone tissue. In particular daidzein contained in the extract of red clover may inhibit the differentiation and activity of osteoclasts to the same extent as that of 17b-estradiol. On the other hand several studies have shown that isoflavones can stimulate the development of osteoblasts (cells responsible for bone growth), the property is uncharacteristic for the estrogen. As for the skin! A high degree of lipophilicity of phytoestrogens and their low molecular weight contributes almost smooth penetration of these compounds through the basal membrane. Primarily attracts attention is their ability to maintain a sufficient level of moisture and skin turgor. We must also not forget that all of phytohormones, especially isoflavones are powerful antioxidants that inhibit the peroxidation and early photoinduced skin aging. All phytoestrogens, having a much weaker hormonal activity compared with animals estrogen, you will never win a competitive advantage with our own, but will Supplement their deficiencies where necessary. Not to be feared and feminizing action of phytoestrogens on male skin, where they will play the role of an exclusively anti-inflammatory agents and antioxidants.

Green energy of the planet 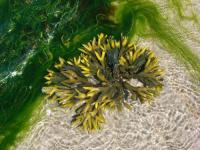